II.14 Policy choices for helping or hindering the poor

Biodiversity is at the basis of human life and well-being. The rich diversity of life is being locally and historically contextualized into ecosystems. These ecosystems are models of resilience, from which one could learn a great deal. Many peoples, communities and cultures actually have learned a lot and have made it part of their traditional knowledge.

Unless there is a serious disruption of their functions, ecosystems provide benefits/services to humans which are essential to their well-being.

People drink water. Water is filtered by biodiversity and the water supply is kept steady through biodiversity storage systems, such as wetlands, forests, and soils rich in humus content. Severe harm is caused by land degradation, deforestation, and loss of humus-rich soil ecosystems. Humans are eating biodiversity. Many people are stilling their hunger with wind-pollinated cereals, such as rice, corn and wheat. Many people depend on fish for their protein supply. The quality of our meals in terms of nutrition, taste and social interaction needs more than just some carbohydrates and some proteins. The recent report of the Intergovernmental Science-Policy Platform on Biodiversity and Ecosystem Services on pollinators, pollination and food production demonstrates some of the complex interlinkages.1 Pollinators, essential for the provision of fruits, vegetables and nuts, whichin turn, are essential for food security and healthy nutrition, are declining.

Agricultural practices, such as large monocultures of grains sprayed with herbicides, or large-scale applications of insecticides are known to harm pollinators. Poor people who can neither afford world market prices for vegetables, fruits and nuts nor afford to buy vitamin and micronutrient supplements for themselves and the healthy development of their children call such practices unsustainable. The rich, however, may not even notice that there are destructive impacts. Similar threats arise in terms of the impact of clothing, housing and energy production for those who directly depend on biodiversity to provide for their survival.

There is a dramatic asymetry between the rich and the poor in terms of dependence on direct ecosystem services. This has been described in the report of The Economics of Ecosystems and Biodiversity (TEEB) initiative for policy makers as the difference between the GDP of the poor sector of the population versus the average GDP in terms of their reliance on ecosystem services (see Figure II.14.1).2 This dependence is often not market-mediated and is known to pose problems for economic quantification. The reality on the ground may be even more asymetrical. 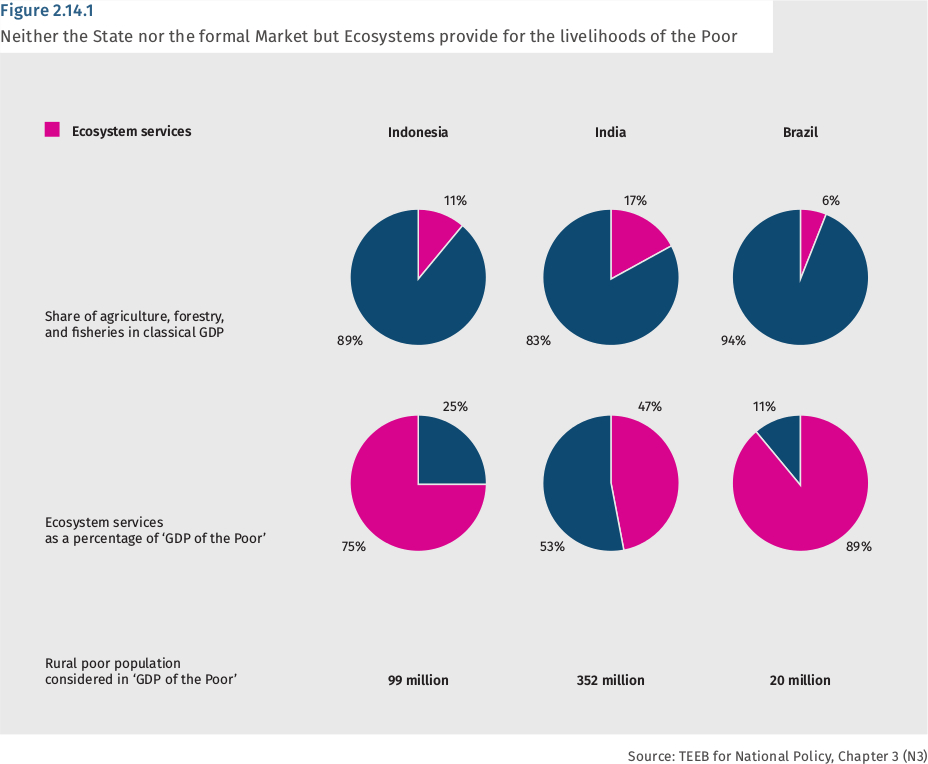 For poor people stricken by disasters and conflicts the interaction between biodiversity and people becomes even more relevant. Studies have shown that biodiversity hotspots are also hotspots of conflicts. Up to a point, biodiversity will provide even if all else fails, but after that point, it no longer can. A wide-ranging variety of emergency services rely on biodiversity: food, fresh water, wood and fibre, shelter, fuel, personal safety, the ability to hide, the ability to help others. Numerous recovery services also depend on biodiversity, such as water purification, climate and temperature regulation, soil protection and soil formation, recovery of social cohesion and community building. The same is true for livelihoods, even under ‘normal conditions’. Emergency conditions make affected people ‘poor’.

Moreover, disasters and conflicts are themselves drivers of biodiversity loss. They drive over-exploitation, pollution, habitat change and habitat destruction. The mutual relationship between biodiversity and people must not reach the tipping point of synergy of destruction, nowhere and for nobody.

Natural disasters and resource conflicts will increase in the future unless countries adopt—and invest in—equitable and sustainable development policies.

It is evident that SDG 15 is not a stand-alone goal, or for conservationists only. Rather it is a cross-cutting goal. It has to be seen in the light of SDG 1 on poverty, SDG 3 on health, and SDG 6 on water and sanitation. It has close links to SDGs 10, 14 and 16, on inequality, marine resource management and just and inclusive institutions.

The perception, strategies and policy preferences of poor people differ from those who make their living in a global investment-driven market. Poor people need the establishment of a firm legal framework and the implementation of their rights. Voluntary guidelines implying a self-committment of those in power are not enough. You would not trust the voluntary guidelines of robbers to really protect your own home. The so-called “environmental and human rights safeguards” very often do not go beyond voluntary codes of conduct or voluntary guidelines. Peoples’ lives and livelihoods need established rights. Land tenure rights need to be recorded and defended. Fake participation and agreements under pressure need to disappear or, at least be contestable by affordable access to justice. Free prior consent of all peoples’ affected needs to be a prerogative for interventions and projects. This should take into account and disallow all the indirect pressures on the persons affected which are spelt out in the Nuremberg Code.3

Poor people cannot buy their survival on the world market. They cannot buy bottled water if their rivers are polluted. They cannot move house to nice surroundings and views on intact nature if the ecosystems on which their culture and community depended are destroyed. They cannot discount the future, meaning earning more now and invest the earnings in buying their private way out of a disaster later. Poor people need the prevention of harm. In case of scientific uncertainty and if there are indications of serious or irreversible harm, they need decisions to be made on the basis of the precautionary principle: ‘do no harm’. Decisions based on the precautionary approach have been taken by the Parties to the Convention on Biological Diversity (CBD) on Ocean Fertilization and Geoengineering and on many other climate-related issues where the 196 Parties to the CBD committed to applying ecosystem-based approaches to climate change mitigation and adaptation.

This also applies to the interface between SDG 15 and SDG 13, between terrestrial biodiversity and climate change. They are not as easily compatible and mutually supportive as was naively assumed at the Earth Summit in Rio in 1992. Again, the relationship is asymetrical. The issue of climate change has received a large amount of policy and public interest. The CBD consistently acknowledges and works on the findings and decisions on the impact of climate change as well as adaptation and mitigation. Sor far, it does not happen the other way round.

Through proposals for carbon pricing, money and CO2 equivalents/Global Warming Potential (GWP) of greenhouse gases are seen as globalizable accounting entities, inviting the concept of offsetting.

Offsetting itself involves problems, as do efforts to financialize ecosystems. Biodiversity and ecosystems are unique, local and historically interlinked. This is true for the species and their interlinkages and feedback loops, as well as for the peoples, communities and their local and diverse cultures whose lives depend on these ecosystems, be they rural or urban slum dwellers. There are many scientific, socio-economic and cultural reasons why “repotting” ecosystems and uprooting communities does not work. It does not work, but it has been done and is still being done.

In this regard, there are conflicting perceptions of what the TEEB Report, as well as the Review on the Economics of Climate Change, authored by Nicholas Stern,4 are really meant for. For some, their findings provide good arguments why the postponement of measures to mitigate and adapt to climate change is an economically stupid option – which is a very valuable contribution to the international debate. The same is true for biodiversity. Halting biodiversity loss now is the better economic option. For others, however, the two reports are seen as a chance to finally arrive at a total financialization of nature. The latter option would mean that those who decide are those who have the money to invest. The preferences and lives of those without capital to invest are neglected and easily sacrificed.

The biofuel debate can give us a warning as to future conflicts ahead. Bio-energy with carbon capture and storage (BECCS) is a mechanism promoted by many experts in the climate change debate, who argue it is the only way to achieve the ambitious goal of limiting temperature rise to less than 2°C, even aimimg for 1.5°C. These experts did not even deign to look at ecosystem-based approaches to mitigation and adaptation.

What would BECCS mean? Ever larger areas in developing countries on which poor communities live on will be called “degraded and underutilized.” Ever more developing heavily indebted countries will be persuaded – with more or less pressure and blackmail behind it – to let BECCS take up large portions of their territories. Land rights, human rights, livelihoods, food and nutrition, community coherence and ecosystems will be sacrificed and irretrievably lost.

Can any of these things be restored? Is destroy and restore a realistic option? Public relations experts will promote the BECCS strategy in order to get the permit to destroy. Who will pay for restoration? Restoration of a type decided by whom? Ecosystem restoration with or without people and decent lives and well-being? Restoration is needed for already severely harmed landscapes. But not without local participation in the decision-making. And there can be no offsetting of destruction permits against promises of restoration.

And there is an additional problem with BECCS, in that it is meant to bypass the mobilization of the political will needed to phase out fossil fuels quickly. The rights of rich consumers, primarily in the North, to an unlimited number of miles in their unlimitedly gas-greedy cars could be superseding the rights of the poor to their life and well-being.

Poor people and biodiversity both are being victimized by a type of scientific approach that favours the outside expert: Extractive Knowledge. They both need Cognostic Knowledge where none of the players are deemed to know it all and consequently should decide it all. There are, however, established hard-core asymetries, which willnot dissolve accidentally, and require official government action. They need systemic legal and institutíonal reform. Decisions on land use and land use changes are highly relevant for biodiversity and poor people. There is no offsetting of rights; prevention and precaution and the very basis of life should be the rule not only in biodiversity and climate change but also in agricultural and other sectoral policies.