Poverty eradication is possible with existing resources, but not with present policies, argues civil society at the UN

Global Spotlight Report says that the Agenda 2030 proposal to eradicate poverty by 2030 is achievable but tax policies need to change.

New York, 11 July 2017: “The promise made by governments to eradicate poverty by 2030 is doable if countries cooperate to fight tax evasion and capital flights” argues an independent report submitted to the High Level Political Forum of the United Nations as an input to its debate today around the first of the Sustainable Development Goals (SDGs).
read more

World Bank plan to mobilize “trillions” will not help the poor

Global Spotlight Report says that the proposed “cascade” of private financing for infrastructure will result on more corruption, high fees for essential services, and massive resource transfers to the rich from the poor

New York, 11 July 2017: The “leave no one behind” slogan and the proposition to increase funding “from billions to trillions” made by the development banks and the International Monetary Fund are the two policy messages most commonly heard at the debate around the Sustainable Development Goals (SDGs) that started yesterday at the United Nations. “You cannot have both at the same time” commented Roberto Bissio, coordinator of Social Watch, summarizing the analysis of the first SDG by the global [...]
read more 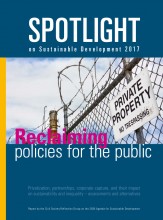 New York, 10 July 2017: A global coalition of civil society organizations and trade unions presents today the report Spotlight on Sustainable Development 2017. It is published on the opening day of the High Level Political Forum at the United Nations in New York. The report provides the most comprehensive independent assessment of the implementation of the 2030 Agenda and its Sustainable Development Goals (SDGs).
read more

In the UN General Assembly resolution adopting the 2030 Agenda on 25 September 2015, SDG 1 reads: “End poverty in all its forms everywhere”, with target 1.1 stating: “By 2030, eradicate extreme poverty for all people everywhere, currently measured as people living on less than US$ 1.25 a day.” Yet, in early October 2015, the World Bank stated that the international extreme poverty line needed to be updated in order to take [...]

With contradictory arguments, the World Bank defines a very low threshold that would make poverty eradication possible with relatively little effort and at the same time argues that it is necessary to “move from millions to trillions”. Accordingly, it has taken a “cascade approach” to investment decision-making to encourage partnerships with the private sector. The winners are the big financial intermediaries, who leverage these partnerships, while the poor might end up paying additional fees for [...]

II.1.1 Leaving no one behind calls for far-reaching changes in the way development agencies operate

For some development agency staff, involving people living in poverty in development programmes appears to be too difficult, time-consuming and costly. Some have developed forms of ‘willful blindness’ over the exclusion of the poorest people in the projects they finance, classified as such and analyzed by Jean-Michel Séverino, former Vice-President of the World Bank and former Chief Executive Officer of Agence Française de Developpement. Refusing to see this exclusion as problematic makes [...]

II.1 The new goal on poverty: A welcome paradigm shift

The first goal in the new sustainable development agenda is very ambitious and sets a high standard for the international community: End poverty in all its forms everywhere.

Ending poverty is an aspiration that is implicit in the 1945 United Nations charter that includes in its preamble the determination “to promote social progress and better standards of life in larger freedom.” The Universal Declaration of Human Rights (1947) established “freedom from fear and want” as [...]