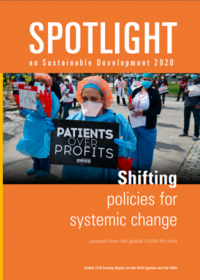 If you missed the virtual launching event you can watch the recording here. 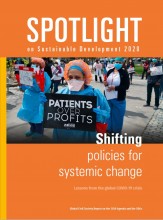 Global Civil Society Report on the 2030 Agenda and the SDGs

The COVID-19 crisis and the worldwide measures to tackle it have deeply affected communities, societies and economies around the globe. The implementation of the United Nations 2030 Agenda and its Sustainable Development Goals (SDGs) has been put at high risk in many countries. COVID-19 is a global wake-up call for enhanced international cooperation and solidarity.

But calls for “building back better” by just pushing the reset button will not change the game. We need structural changes [...]

On 4 August 2020, Beirut was hit by an explosion that killed over 200 people, wounded several thousand and led to billions of dollars in economic losses, as the country goes through a deep economic, financial and social crisis, putting its economy on the brink of total collapse.

The social repercussions of the explosion are major. Around 300,000 families lost their homes, businesses and livelihoods. The fragile food security situation brought about [...]

Kerala is a densely populated state of 35 million people in South West India. Led by the Left Democratic Front, it stands out among India’s 28 states for its successful performance during COVID-19. As a first step, in mid-January Kerala prepared itself on the health front by creating a Corona Control Room with 18 task forces to combat the coronavirus. By the end of March, a set of thoughtful measures were crafted to mitigate [...] 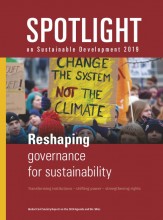 New York, 8 July 2019: “The world is off-track to achieve the Sustainable Development Goals (SDGs). Most governments have failed to turn the transformational vision of the 2030 Agenda into real transformational policies. Even worse, xenophobia and authoritarianism are on the rise in a growing number of countries.”

“The implementation of the 2030 Agenda is not just a matter of better policies. It requires more holistic and more sweeping shifts in how power is vested, including through institutional and governance [...]

SDG 16 – Governing for gender equality and peace? Or perpetual violence and conflict?

Realizing SDG 16 on peaceful, just, and inclusive societies requires a power shift that re-centres work on equality, development and peace around the voices, human security and rights of women and those most marginalized. This requires not just technical fixes, but structural transformation that moves from institutionalizing a form of governance that enables domination and violence to institutionalizing a form of governance that enables equality and peace for people [...]

Sustainable development: First, do no harm

Fulfillment of the vision laid out in the 2030 Agenda means creating conditions in the inextricably related economic, environmental and social dimensions of life that enable people to individually and collectively create and enjoy their vision of a good life in a manner that also permits the flourishing of the planet.

Individual and collective visions of a good life will occasionally conflict or even preclude the realization of one over another. But the essence [...]

In the 2030 Agenda for Sustainable Development, UN Member States pronounced their commitment to “reaching the furthest behind first”. What does it mean to apply this commitment to governance and related policies, budgets and institutions?

This chapter explores the implications for global governance of the promises of the 2030 Agenda, the practice of the High-level Political Forum (HLPF) and the many and sometimes contradictory approaches and initiatives of the UN system and its ‘governors’ [...] 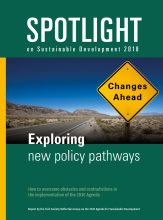 Cover
The third edition of the civil society report Spotlight on Sustainable Development states that unpaid care work represents the largest subsidy to the global economy and the main obstacle for women´s economic participation. Care public policies are needed to transform the social organization of care and narrow gender gaps.
read more

By Development Alternatives with Women for a New Era (DAWN)

SDG 16 on peaceful and inclusive societies calls for building effective, accountable and inclusive institutions, in the belief that the impact of good governance on development outcomes can be a positive one. This is of special relevance for the no longer postponable fight against illicit financial flows (IFFs). As a joint FES/DAWN study on IFFs and gender 1 points out, this challenge is also a [...]